Work on your own projects, improve your skills and work with us on WI craft projects
Our Craft Group provides a welcome space in busy lives for personal crafting time and the possibility of acquiring new craft skills and techniques.  All levels of expertise are catered for from the beginner to the experienced crafter. When there is no specific joint project underway, members are invited to bring their own current pieces and to work on them while enjoying a sociable afternoon or evening. 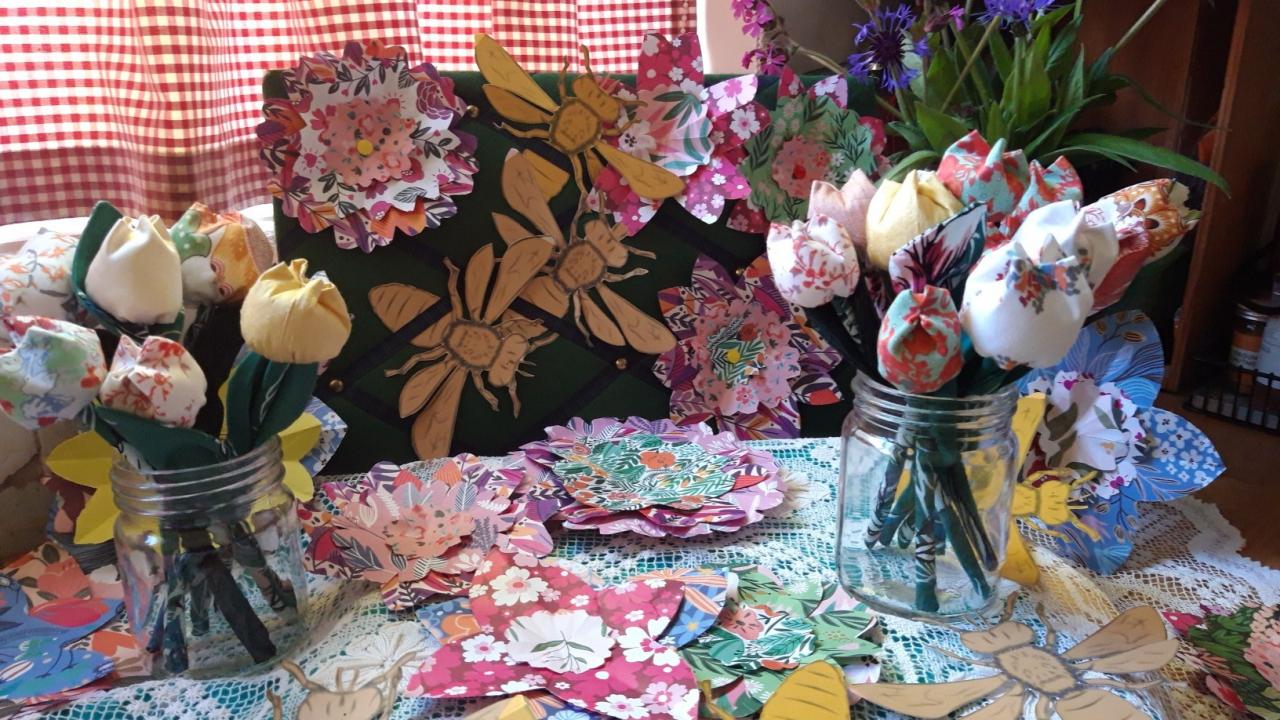 Origami flowers, cut-out bee shapes and fabric tulips all made by the members of our Craft Group. May 2022.

Just three Craft Group members met on Thursday 28 April at Chris’ to put together more component parts for  our fabric tulips, in preparation for our Members’ Meeting in May, when part of our meeting will highlight our crafted origami flowers, cut-out bee shapes and tulip creations to celebrate International Bee Day for 2022 on Friday 20 May.   We are to meet again on Wednesday 18 May and hopefully with a full complement of members to work on more fabric flowers for future use.  We have already looked ahead to future craft makes of bunting, poppies for November and even Christmas crafting projects.

An excellent Craft Group meeting on Thursday 21 April when a smaller group than usual managed an exciting production line for our origami flowers and bee cut-outs for May’s Members’ Meeting. The fabric flowers have taken much longer to cut-out, prepare and construct but we completed them in time to decorate The Institute as planned and enjoy the results of our labours.

Members enjoyed a most productive Craft group meeting on Monday 28 March, for our Spring has Sprung project for April, making pop-up tulip and rose cards to be given out to all members at our Meeting on 7 April.  We have so enjoyed making our cards, with a pattern cleverly sourced by Janet, that we are considering creating our own greetings cards in future, for all members, for  all occasions.

On Monday 14 March after discussing our own latest projects, Janet showed her found ideas for a Spring greetings card to present to the membership at April’s Members’ Meeting.  It was a pop-up flower card which Janet had practised to a point where she was able to demonstrate its design and make-up to us.This led on to a good production line for the card and the two chosen flower designs, with members creating templates, fold-ups and even more intricate flower picture folding.  We were all pleased to be re-purposing paper material such as magazines and plant brochures, using glue, scissors, pens and pencils.

Our group meeting on the afternoon of 14 February gave time for everyone to be busy with their own crafts of knitting scarves and socks, and for crochet enthusiasts to make wash cloths and dish cloths of cotton yarn.  Viewing and discussion of ideas for our Easter-Springtime project  gave rise to a greatly animated exchange on the merits of recent new crafting ideas, material usage, ease and convenience of making and handling, design and most practically, the availability of time to create beautiful objects to share with the membership.

We met on Monday 24 January to share ideas and techniques for creating models for the new and previously unexplored art of origami, which we had just begun practising at home.  Paper folding needs to be precise to create the exact shape required, it is fun and enjoyable and great satisfaction was gained by attending members.  We had sufficient green hearts for the ‘Show the Love’ campaign from our get-together and a new craft understood, ready to use for any future project.

Our first meeting of the new year was on Monday 17 January at 10.30, kindly hosted by Gill. We explored different ways of creating green hearts for the ‘Show the Love’ campaign. As well as the more usual approach using fabric we attempted origami, the Japanese art of paper folding.

In 2021 members of the group met regularly either via Zoom or in person. We enjoyed a variety of projects throughout the year, starting with an introduction to the Japanese craft of Amigurumi. Using crochet techniques new to most of us, we created stuffed dinosaurs in two colours. Next we fashioned flower brooches, making enough to give one to every WI member. Then we turned our minds to Remembrance Sunday and crafted two large wreaths of crocheted or knitted poppies which were displayed in the village. Finally we created the decorations for our entry for the Adderbury Christmas Tree Festival, which celebrated the founding of the first WI in Adderbury in 1921. The decorations were based on items from the banner of the Adderbury and Milton WI which is now held in the National Needlework Archive.

Projects in 2019 included the following:

Every WI in Oxfordshire was asked to embroider a leaf to be part of the Oxfordshire WI 2019 Centenary wall hanging.  Each leaf had to show the full name and date of inauguration of that WI. We chose a sycamore leaf as one was on the banner of the first WI in Adderbury, and one of our members designed and stitched it.

We later found out that the original was actually a maple leaf, celebrating the Canadian origin of the WI movement!

Members created items for a group entry for the OFWI craft exhibition at Didcot. and in the Autumn we made small poppy badges, one for for each member to wear at the November meeting.

Group members also helped with making the decorations for our entry in the 2019 Christmas Tree Festival.